Sailboats are mainly powered by the wind and are simple but incredible vessels that once opened up new pathways for exploration and international trade. Many believe that the sailboat shaped the modern world. If you don’t know how sailboats work, you’d be surprised to learn how simplistic the design really is and just how much it has changed over the years.

While no one really knows exactly when the first boat was built, the remains of sailboats have been found that date back to ancient Egypt.

Key Takeaway: Learning how sailboats work will not only make you a better sailor overall, but it can help you to get the most out of your next trip and can teach you how to navigate the waters and take advantage of certain types of wind and water conditions.

Read on to learn about the anatomy of the sailboat and how to sail like a pro.

Sailboats Over the Centuries

Over the centuries, sailboats have steadily developed, offering faster speeds and improved maneuverability, easier handling, and a more durable design.

Sailboats range in capability and size, but each type of sailboat is linked by basic elements. Whether the vessel is large or small, sailboats of the past and present both feature the same movement and flotation abilities.

The shell of the boat is called the hull and it contains all of the internal components. The shape of the hull balances the boat and reduces drag, which is caused by friction. In the stern of the boat, you’ll find the tiller, which is attached to the rudder. If the rudder of the sailboat is the tire then the tiller is the boat’s steering wheel. In order to maneuver a boat, you’ll pull the tiller to one side, causing the rudder to change direction. 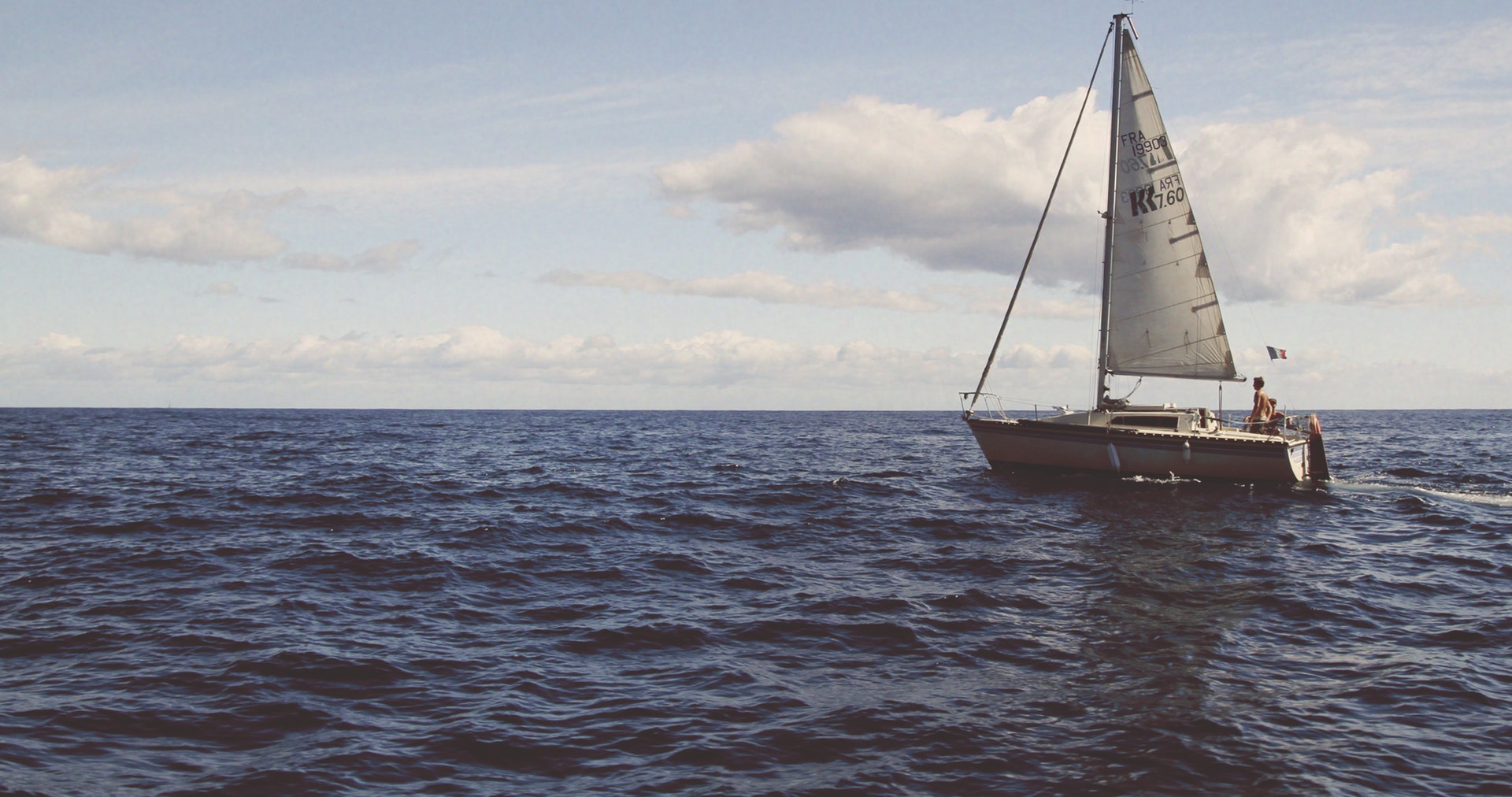 The keel and the sails work as the sailboat’s engine. The larger sail is called the mainsail and it catches most of the wind power that’s necessary to propel the boat. The vertical side of the mainsail attaches to the mast, which is a long pole. The horizontal size of the mainsail attaches to the boom, which is a massive pole that runs parallel to the deck. A sailor can rotate the boom three hundred and sixty degrees from the mast in order to allow the sail to capture as much wind as possible. When the boom is pivoted perpendicular to the wind, the sail will push outward. It will also go slack when it’s swung parallel to the wind. This type of freedom of movement will allow the sailor to catch the wind in any direction it blows. The small triangular fixed sail that provides added power to the mainsail is called the jib. The slim, long plank known as the keel, juts from the bottom of the hull, providing a balancing force underwater that prevents the boat from tipping over. In smaller boats, a daggerboard or centerboard has the same task as the keel and prevents the boat from tipping over, however, the daggerboard can be lowered or raised into the water in order to allow the boat to move through shallow waters.

To learn more, you can click here to read our article on how to make sail.

How the Sailboat Floats

According to Archimedes’ principle, in order for a boat to float it must first displace an amount of water that’s equal to its weight. As the boat’s weight pushes down, displacing the water underneath it, an upward force that’s equal to that is what holds the boat up.

In order to displace the right amount of water to keep the boat afloat, the boat must have a density that’s less than water. Because of this, the hull of a sailboat is always hollow. A boat’s average density is less than water, whether the boat is made out of fiberglass or wood.

The boat’s surface area is also what helps to keep it afloat. A large surface space will give the boat a better chance of displacing enough water to offset the boat’s weight.

Taking Advantage of the Wind

As you know by now, a sailboat needs a certain amount of wind to move. Stronger winds means an increase in your sailboat’s speed. If you understand the anatomy of the sailboat, how it works, and how to use the sails in order to trap wind, you can make better time and reach your destination on schedule.

When sailing, you must learn how to determine the direction of the wind in order to take advantage of it. There are actually some basic tools that can help you determine the direction of the wind, such as telltales. This tool is just a length of nylon that’s tied to the backstay and shrouds. At the top of the mast should be a masthead fly, complete with a wind arrow.

Using your sails to locate wind is another option. An experienced sailor can also look at the surface of the water to determine the wind’s direction, but this technique can take years of practice.

To increase a sailboat’s speed you must first pick a distant point to aim for. Next, try a little experimenting by heading up and bearing off, gradually, as you adjust the sails. Steering in this manner will take a little practice.

The most relaxing point of sail is called running with the wind. Since the wind isn’t blowing across the sailboat, there will be no sideways force. As the sailor bears off from the beam reach to a run, they will need to ease out the sheets in order to allow the sails to grab as much wind as possible.

If the sailboat has a centerboard, the sailor will need to have it raised when they’re running. When running straight with the wind, the centerboard isn’t needed to keep the boat from moving sideways, however, a little board can help minimize any type of side to side rocking. If your sailboat doesn’t have a centerboard, in high wind conditions, stabilizing the boat and preventing any side to size movement can be almost impossible.

Beginners often struggle with steering the sailboat in high and low wind conditions and it’s true that it can be very challenging. Sailing is more of an art form, and like any art form, learning how to master it will take time, skill, and proper guidance.

How They Glide Through the Water 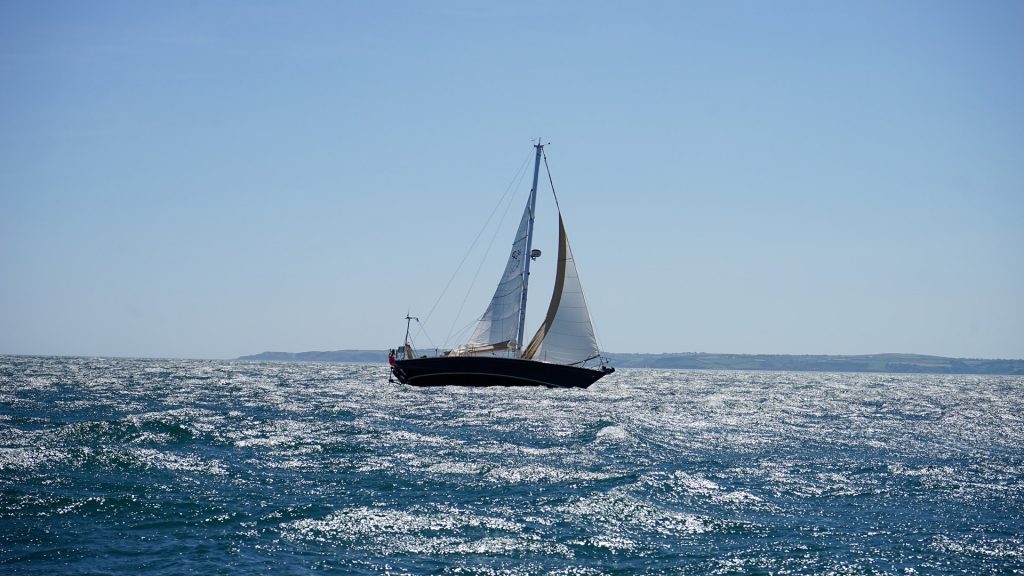 Your first few times in a sailboat will be exhilarating and challenging. With a little practice and a few tricks up your sleeve, you should be able to get the hang of steering the boat in no time. However, if you’re planning on taking your sailboat for an extended sailing adventure, you’ll have a lot to learn, including how to properly position the boat in order to grab more wind and increase your speed.

When you’re traveling downwind with the wind at your back you’ll let the mainsail loose, keeping it perpendicular to the wind in order to harness the most energy. The wind will press directly into the sails. This is what naturally propels the boat forward.

But plotting a course upwind can be much harder. It’s actually impossible to sail directly upwind. Either the wind will stall the boat if the sails are slack and pulled in, or the wind will push the boat backward.

While the wind pushes the sailboat when going downwind, the opposite will happen when traveling upwind. When sailing upwind the boat is actually being pulled instead of pushed by the wind. The forward pull is referred to as lift. When steering upwind, you’ll have to make a zigzagging path which is known as tacking. When tacking, the wind won’t approach head on and will instead come at the boat from an angle. When the sailor uses tacking, the sails work like an engine, harnessing the power of the wind. But because the boat is moving in an angled position, the wind ends up pushing the sailboat sideways. As the boat is pushed to one side, the flat, long keel pivots upward and creates a sideways force in the opposite direction due to the amount of water that’s displaced as it moves. These opposing forces work to cancel each other out.

Today’s sailboats are sleeker, lighter, and faster. They’re also much wider, which works to increase the boat’s stability.

The keels are also sleeker and longer, which allows for a quicker, closer tack. Their large surface area tends to displace more water, allowing for a tighter tack. These modern sailboats simply slice through the water, without the worry of drag. Designers have also honed the hull in order to reduce pull using newer materials such as fiberglass.

Due to their innovative modern designs, some boats can exceed the speed of wind.

But while many of the components on these vessels have been remade and improved upon, the basic elements of how sailboats work still remains the same.

If you’d like to learn more about the art of sailing and the type of gear you’ll need, click here to read our epic buyer’s guide on sailing pants. 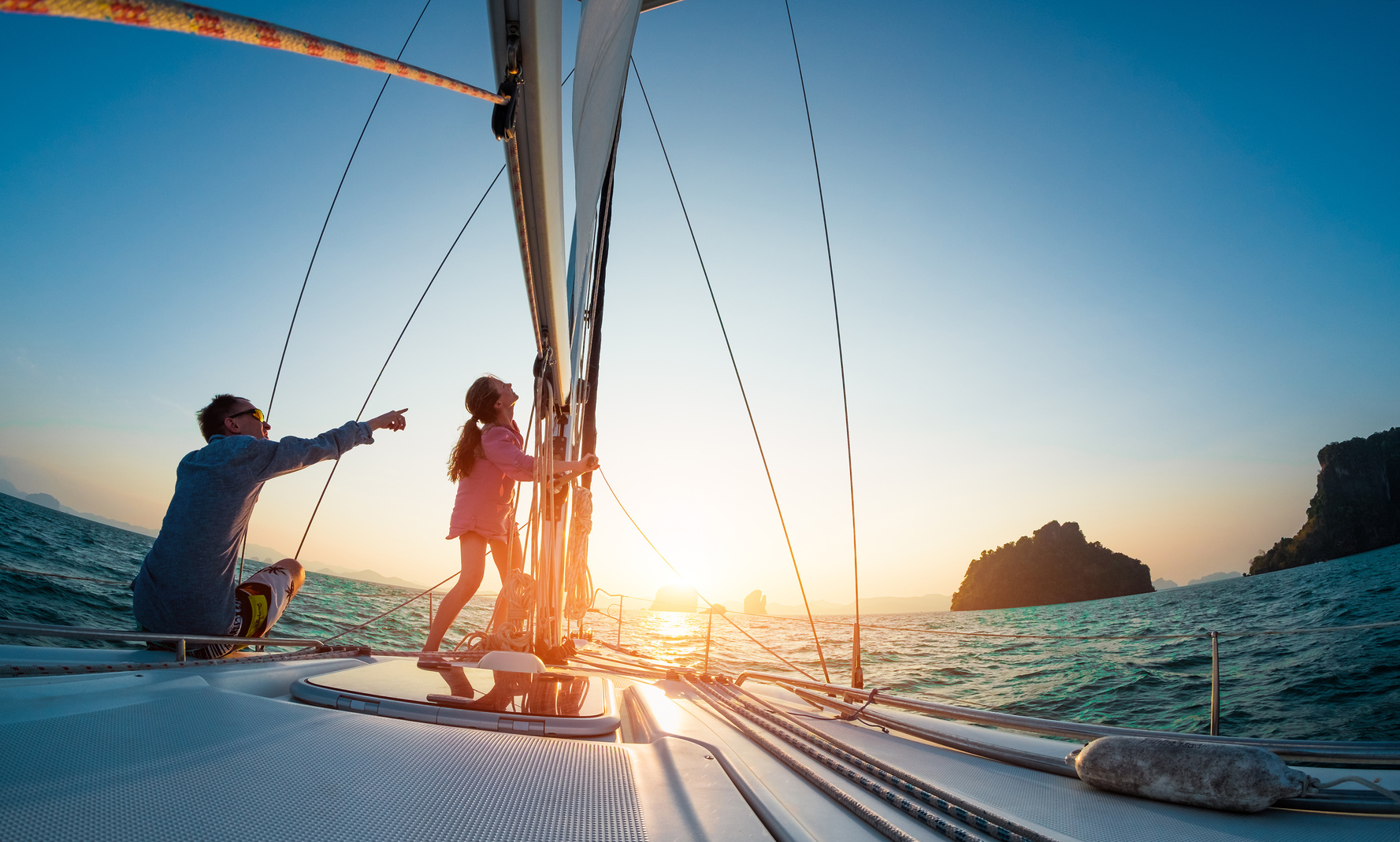 Article Name
How Modern Sailboats Work: The Evolution of the Sailboat
Description
Over hundreds of years, many components on the sailboat have changed. Learn about the eight that have remained staples that are used in every boat's design.
Author
Sail Outfitter

You can find out more about which cookies we are using or switch them off in settings.

This website uses cookies so that we can provide you with the best user experience possible. Cookie information is stored in your browser and performs functions such as recognising you when you return to our website and helping our team to understand which sections of the website you find most interesting and useful.

Strictly Necessary Cookie should be enabled at all times so that we can save your preferences for cookie settings.

If you disable this cookie, we will not be able to save your preferences. This means that every time you visit this website you will need to enable or disable cookies again.